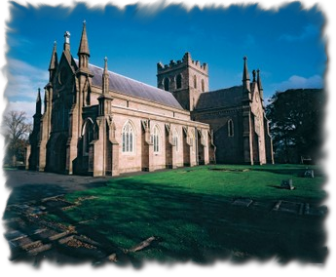 Saint Patrick
He was a fifth-century Romano-British Christian missionary and bishop in Ireland. Known as the "Apostle of Ireland", he is the primary patron saint of Ireland, the other patron saints being Brigit of Kildare and Columba.
The dates of Patrick's life cannot be fixed with certainty, but there is broad agreement that he was active as a missionary in Ireland during the fifth century. Nevertheless, as the most recent biography[5] on Patrick shows, a late fourth-century date for the saint is not impossible.
According to the autobiographical Confessio of Patrick, when he was about 16, he was captured by Irish pirates from his home in Britain and taken as a slave  to Ireland, looking after animals; he lived there for six years before  escaping and returning to his family. After becoming a cleric, he  returned to northern and western Ireland. In later life, he served as a  bishop, but little is known about the places where he worked. By the  seventh century, he had already come to be revered as the patron saint  of Ireland.
Saint Patrick's Day  is observed on 17 March, the supposed date of his death. It is  celebrated inside and outside Ireland as a religious and cultural  holiday. In the dioceses of Ireland, it is both a solemnity and a holy day of obligation; it is also a celebration of Ireland itself.
View a pdf of a Pilgrims Guide: from discovernorthernireland.com called St Patricks Way-The pilgrim walk, which has a wealth of information for you to follow and stails to walk and learn more.
The only name that Patrick uses for himself in his own writings is Pātricius [paːˈtrɪkɪ.ʊs], which gives Old Irish Pátraic [ˈpaːtraiɡʲ] and Modern Irish Pádraig [ˈpˠaːd̪ˠɾˠəɟ]; Scottish Gaelic Pàdraig [ˈpʰaːt̪ɾɪkʲ]; English Patrick; Welsh Padrig; Cornish Petroc.
The Irish annals for the fifth century date Patrick's arrival in Ireland at 432, but they were compiled in the mid-6th century at the earliest.[16] The date 432 was probably chosen to minimise the contribution of Palladius, who was known to have been sent to Ireland in 431, and maximise that of Patrick. His birth year is also uncertain. The Monasticon Anglicanum says he was born in 361.[26] Other sources either say that his birth year is unknown[5] or speculate it to be around 385.
Facts
Links
St Patricks Brest-Plate (pdf)
Related places
Back to content